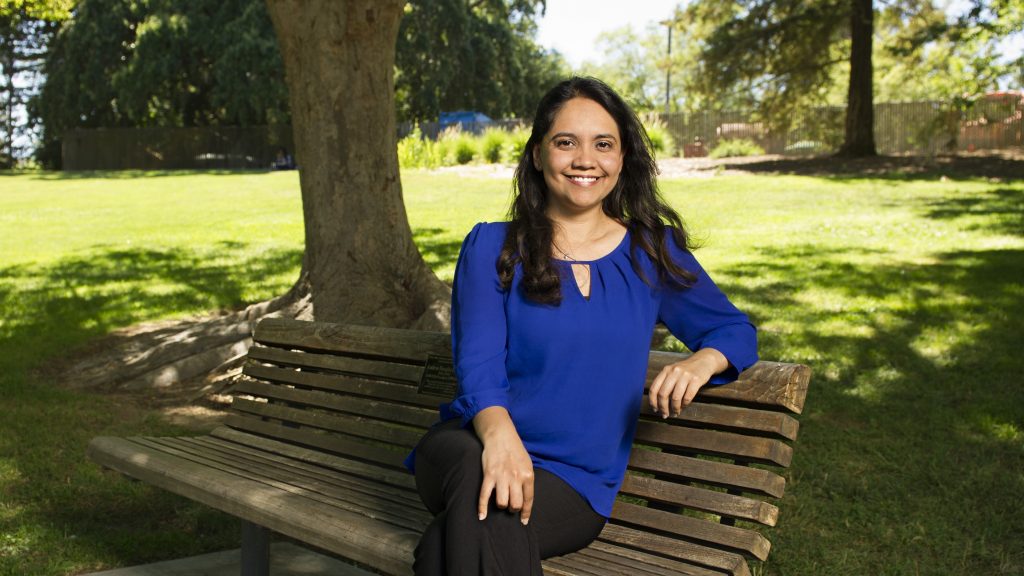 Assistant Professor Cindy Rubio-González has received an Early Career Award from the U.S. Department of Energy’s Office of Science.

The annual award, now in its tenth year, supports the research programs of outstanding scientists and engineers around the country who received their Ph.D. less than 10 years prior. Rubio is one of 73 scientists selected across the nation, and one of four winners from academia selected by the DOE’s Office of Advanced Scientific Computing Research.

Rubio’s proposal, “Towards Scalable Precision Tuning of Numerical Software” tackles challenges of accuracy and processing speed in large-scale scientific numerical programs. Computers have a finite number of bits to represent real numbers, so some numbers have to be approximated using techniques such as floating point.

Floating point is a widely used representation that approximates real numbers using single or double floating-point precision, depending on the number of bits to be used. Programmers generally use the highest available precision—or the largest number of bits—which while more precise, can negatively impact performance.

“What we’re trying to do is automatically find areas of the program where you can use lower precision floating-point numbers while still making sure the accuracy of the result is acceptable,” she said.

Lowering floating-point precision, or using fewer bits to represent numbers, can help programs run more efficiently without sacrificing accuracy. Though these techniques exist for small or medium-sized computing systems, they don’t scale to larger systems such as weather simulations that can run for weeks instead of a few minutes. Rubio plans to develop new techniques to solve this problem.

As part of this project, she also plans to develop new techniques to generate floating-point inputs to be used in precision tuning, and to establish benchmark data so that she and her colleagues in the field can learn how to best optimize numerical applications.

She joined UC Davis in November 2014 after completing postdoctoral work at UC Berkeley. Since then, she has been named a UC Davis Hellman Fellow, received an NSF CAREER Award and co-founded BugSwarm, a database of reproducible software bugs and bug fixes. This is the second award she’s won in 2019, as she also received the Facebook Probability and Programming Research Award with assistant professor Aditya Thakur in May.

Rubio is the third UC Davis faculty member to receive the award and the second in the College of Engineering. It was previously won by materials science and engineering professor Ricardo Castro in 2011 and plant biology assistant professor Phillip Zerbe in 2018.