Developing an app to connect women in computer science 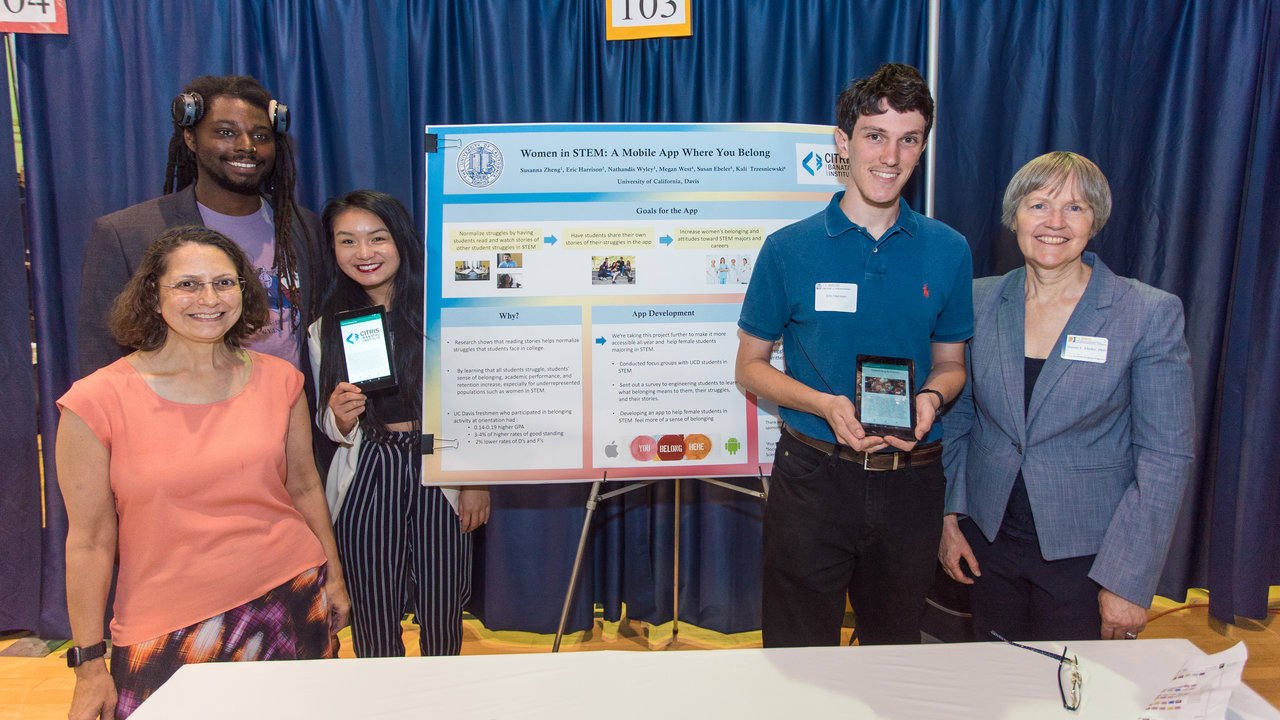 A team of undergraduate students at UC Davis are working to create a mobile app for women in computer science to connect with one another and nurture a sense of belonging to overcome academic and social adversity. The app will collect and share stories from students who have struggled and overcome their struggles to normalize these challenges and build a sense of community.

The project is supported by the Center for Information Technology Research in the Interest of Society (CITRIS) and the Banatao Institute, an interdisciplinary institutes for engineering, science and innovation created by the State of California in 2001 to develop applications, platforms and companies from student research and find solutions to society’s greatest challenges. The UC Davis branch, led by mechanical and aerospace engineering distinguished professor Bahram Ravani, boasts expertise in engineering and has Aggie engineers involved in every project.

Belonging intervention has been a part of summer orientation for the last three years, but the team wants to bring this resource to students year-round. Research shows that belonging intervention helps increase retention rates and academic performance of underrepresented students, including women in STEM.

“It’s a very scary thing to feel isolated and alone, especially in STEM,” said fourth-year psychology major and project researcher Susanna Zheng. “The app is a way to find a community”

The team consists of Eric Harrison, a computer science major, and Nathandis Wyley from the Department of Electrical and Computer Engineering, along with and researchers Zheng and Megan West from the College of Letters and Science—all of whom are undergraduate students.

Their initial focus is women in STEM and particularly women in computer science, who can often feel out of place in male-dominated classes. This spring, the team lead focus groups of students in introductory computer science classes to understand how best to reach students. They then implement this feedback in the app design.

“Students are really excited about this project because they can see their efforts having an impact on other students,” said College of Agricultural and Environmental Sciences (CAES) professor and project faculty advisor Sue Ebeler. “The idea of students helping students is embedded in the philosophy of what we’re doing.”

The idea began with research from Stanford University that showed that incoming students performed better academically and socially after reading stories of senior students who had overcome struggles in college. The students felt more like they belonged at the university and had a better mindset working through their own problems.

“We have the research that shows there’s a need,” said app developer and second-year computer science major Eric Harrison. “[At Stanford], it closed the GPA gap between men and women, gave women larger and more diverse friend groups and increased their retention rate in STEM majors—all just from reading these stories.”

Ebeler and fellow CAES professor Kali Trzesniewski decided to scale and adapt this research for UC Davis students. They recruited undergraduate students Zhang and West to lead focus groups and began rolling out belonging intervention during summer orientation in 2016.

“We really are trying to create a student-focused, student-driven experience to support students in their transition to college,” said Ebeler. “Many students experience those struggles and they can be academic or social, and we want to create a culture at UC Davis where the institution helps them feel like they belong.”

The team will spend the 2019-20 school year finishing up its research and refining the app so they can roll out their product as a new class of students arrives in fall 2020.

Though the project’s initial focus is women in STEM, the team hopes to eventually make the app a space not only for women in STEM, but also for first-generation, transfer and underrepresented minority students of all genders and all majors.

“We’re not building another resource,” said Harrison, “We’re building a bridge that connects students to resources on campus and reinforces that connection.”

For questions or more information about the project, email belonging@ucdavis.edu.