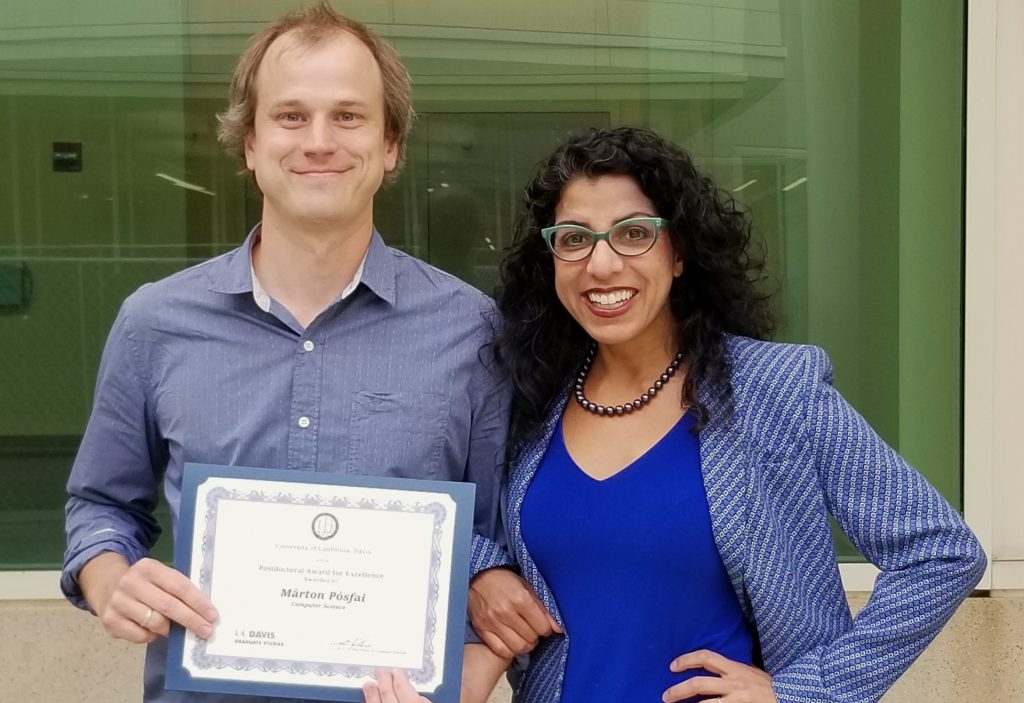 Posfai poses with his advisor, professor Raissa D’Souza, after receiving the Award for Excellence in Postdoctoral Research on May 22, 2019. Photo courtesy of Raissa D’Souza.

Pósfai is a network scientist working in computer science and mechanical and aerospace engineering professor Raissa D’Souza’s group. His dissertation focused on controlling complex networks using a unique combination of linear control theory and statistic physics, a research area that did not previously exist. He expanded on this work in his postdoctoral research at UC Davis, applying it to multilayer networks, nonlinear dynamics and social systems.

“We live our lives in a world where nearly every system that surrounds us is a complex system,” he said. “I hope to understand the underlying mechanisms that shape these systems.”

At UC Davis, he has worked closely with animal scientists in the Primate Research Center to understand the complexities of monkey social networks, hoping to shed light on when and how social order falls apart. He has also contributed network models to political scientists and sociologists and has been the leader, organizer and spokesperson for the university-wide network science working group for the last three years.

“Márton’s interdisciplinary research has really been a great glue across the campus that’s helped bring collaborations together and create cohesion in network science,” said D’Souza.

Pósfai received his Ph.D. from Eötvös University in his native Hungary, working as a visiting researcher in Boston and Berlin during his time there and serving as a contributing author on the textbook Network Science with an advisor.

He will complete his postdoctoral research later this year and start as an assistant professor in the Network and Data Science Department at Central European University in January 2020.

“It’s been really great to see his journey as he’s learned new areas and used theoretical models to really help people with real-world problems along the way,” said D’Souza.

The Excellence in Postdoctoral Research Award is presented by the UC Davis Postdoctoral Scholars Association, which provides resources and advocacy to the campus’s postdoctoral scholars. Nominees are judged by a committee of both faculty and postdocs.